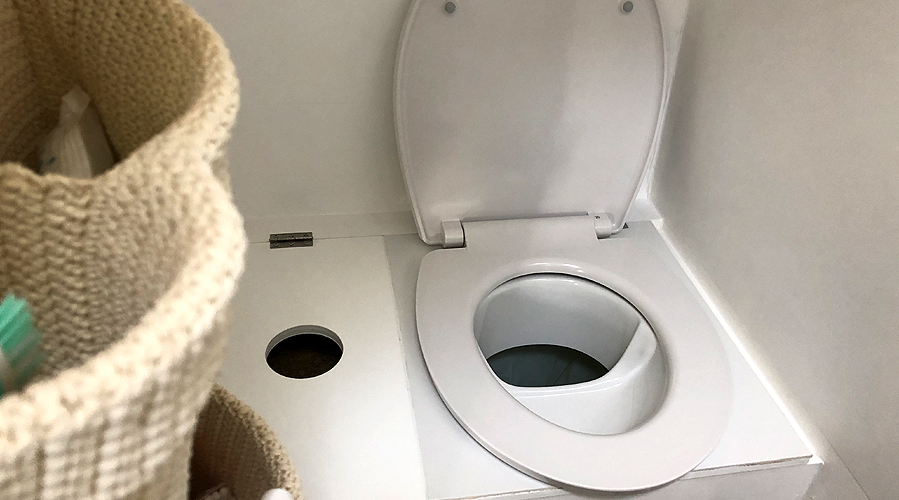 The summer holidays are here and the camping high season has begun. Five fearless camping fans tour the south of England for a good two weeks. On board the camper van: the DIY version of the Kildwick separating toilet.

Three of the five people have never sat on a dry toilet and are therefore quite skeptical. As bedding material for the solid container, 2.5 kilograms of Miscanthus litter are taken along together with a roll of Kildwick solid bags.

The travel group consists of two females and three males.

Right away, the first stop at a farm campsite and the view of the one available WC push the skeptics in the group to voluntarily use the separating toilet.

Conclusions after the first use:

The usual sound of the toilet flushing is missing, but the smooth relief process was surprisingly normal.

The solids container is - as usual and only for safety - equipped with two bags and filled with two to three handfuls of litter before first use. The first emptying of the solids container occurs after five days. After all, it is about three quarters full since there are five participants.

Conclusions of the separating toilet newcomers:

You dont smell your predecessor. Clear advantage over a normal toilet, where ones nose still picks up the smell even after some time has passed if ones predecessor has gone number 2. On the contrary: it smells pleasantly woody, the Miscanthus litter does a great job. Meanwhile, the pressure is off having to do everything right, because there's nothing wrong with it. Normality moves into the field of the camping sanitary process.

With two female traveling companions and 16 days of vacation one should also count on the probability of someone having their period. Dont be shy, because: no problem for the Kildwick separating toilet! Blood during urination and when changing sanitary products runs normally into the urine tank.

Actually more convenient than using a normal toilet. Since the content of the solids container is not composted while camping but instead goes directly into the residual waste, feminine sanitary products can be disposed of in the solids bucket. Simply cover with litter. In contrast to disposal in normal household waste this saves complicated packaging materials or sanitary product disposal bags made of plastic. Possible blood residues are simply removed with a squirt of beeta cleaner and some toilet paper. Odors? No chance!

Please note: If you are planning to compost, sanitary products should not be disposed of in the solids bag.

The Kildwick separating toilet in this caravan does not have the original Kildwick urine tank, but rather a special model with 18 liters of capacity. This is enough capacity for two days (for five people and a significant amount of cool alcoholic drinks). The contents can be easily disposed of while camping: either by emptying directly into an existing toilet or draining into a mobile gray water tank and then disposing of the contents at an appropriate disposal site at the campground.

Even when consuming alcohol, disposal via a dry-separating toilet is very easy. With a larger number of people in combination with very warm temperatures, however, odor development may occur. But there are a few simple solutions: Spray a squirt of beeta - organic beetroot cleaner into the outlet spout of the urine tank to neutralize the smell. If you do not have beeta cleaner on hand, you can also use a tablespoon of household vinegar.

Our Kildwick dry-separating toilet works perfectly. The only drawback is our planning: After eight days, we run out of Miscanthus litter. Hardly surprising with this number of people. As an alternative, 60 liters of small animal litter made of wood shavings are purchased at the nearest supermarket.

The small animal litter is indeed very cheap but problems arise when opening the packaging. The chips are pressed into plastic and sealed. Before use, the clumps must first be loosened. Despite opening the plastic wrap carefully, litter shavings flutter around the camper and the problems continue when loosening the clumps. Cleaning time until all shavings were picked up: 20 minutes. Also, handling the shavings after going number 2 is anything but convenient. Due to its lightness, the litter likes to land where it shouldnt. Unfortunately, odor retention leaves a lot to be desired, which attracts the attention of everyone concerned. The 60-liter litter pack lasts for eight days - as long as 2.5 pounds of Miscanthus litter.

Top conclusion after 16 days of dry-separating toilet use:

The three newcomers are completely convinced (the two old hands knew this of course from the beginning). A little bit more Miscanthus litter should have been on board - our mistake. But we have enough of the remaining compostable cornstarch garbage bags for another journey of the same duration.

A real adaptation process from a normal toilet to a dry-separating toilet is not really necessary - only in the minds of users. End of story.